Our Center SPLITSCREEN is the centerpiece of our Triple SPLITSCREENS Rider protection package – The ROAD GLIDE Center Vent Screen described in detail:

The Road Glide® Center Vent Screen, or Center SPLITSCREEN, is critically important as it is positioned discreetly* to protect the Riders FACE & NECK from road debris and (potentially angry) insect impacts! *inconspicuous protection that’s “not in your face”

Center SPLITSCREEN installs inconspicuously midway within the vent duct and Protects your Neck & Face from ROAD DEBRIS and these Large Potentially  ANGRY INSECTS: 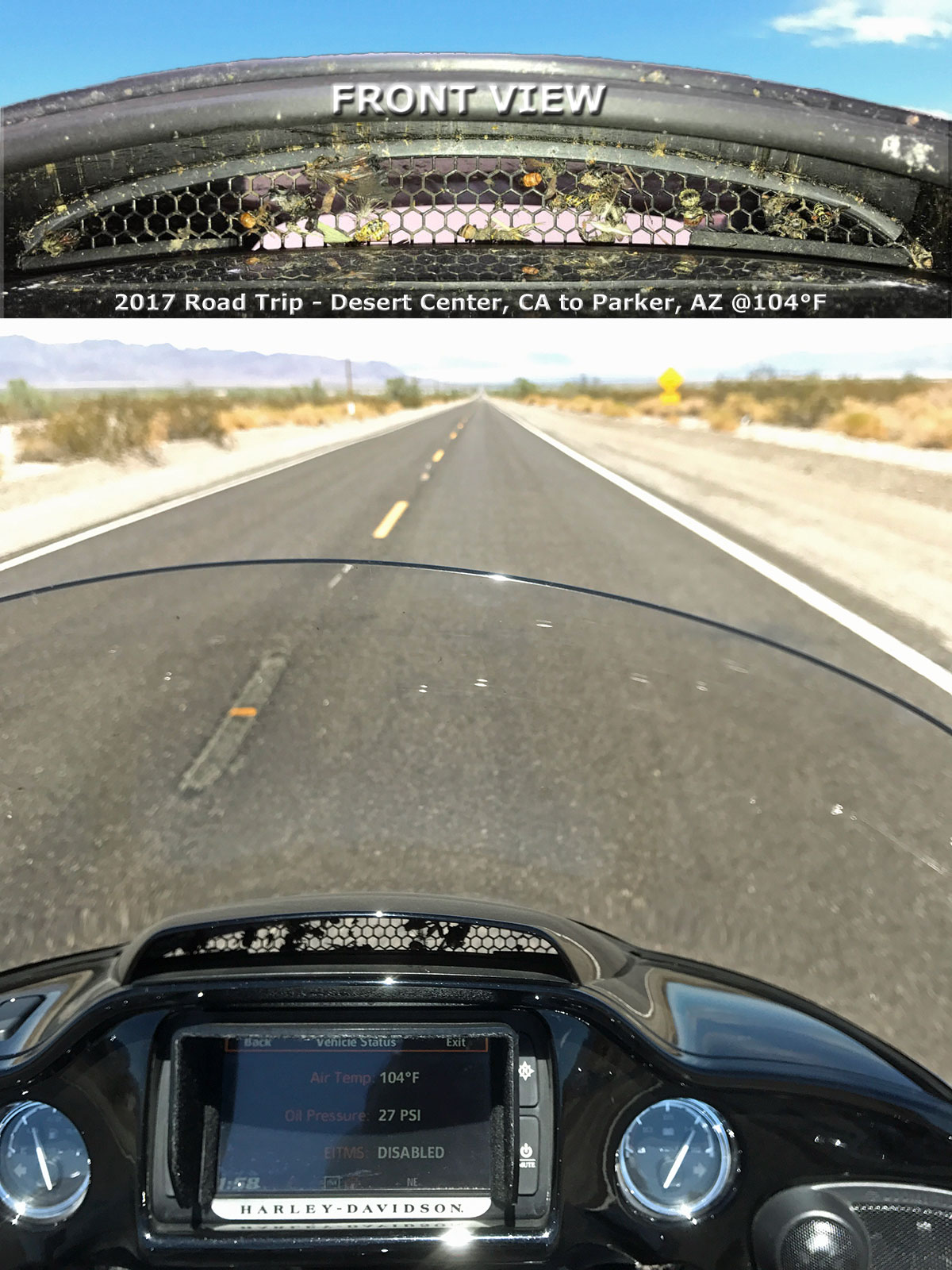 Prior to the availability of a viable Center Vent Screen solution, ROAD GLIDE owners who’d previously purchased (or made their own) SIDE VENT SCREENS had wondered whether the number of bugs passing through the unscreened CENTER VENT was significant. Others had referred to the Center Vent as a “Bug Funnel”! In any event, THE ABOVE PHOTO SHOULD CLARIFY THE REALITIES!

The design of the RUSHMORE Road Glide® AIR DUCT proved quite challenging for installing a vent screen securely as we’re dealing with a “funnel shaped” passageway which offers few (if any) obvious points for firm attachment of the screen. It took a considerable amount research and “trial and error” to produce a solution which remains reliably secured at touring speeds! The UNIQUE ATTACHMENT METHOD we’ve developed which secures our Center SPLITSCREEN (both top and bottom) is PROPRIETARY and therefore (in fairness) offered only to ♥CUSTOMERS♥ who are “riding with us”. Accordingly, each Buyer receives a post-purchase email containing a helpful support document (appropriate pages from the Harley-Davidson® Service Manual) as well as a PASSWORD for access to our Center SPLITSCREEN SUPPORT page. Along with the option to contact us directly, this valuable information provides our ♥CUSTOMERS♥ the support to which they’re entitled!

A matching set of Triple SPLITSCREENS is your best option, however we’re now offering the Center SPLITSCREEN individually on our STORE page.

A message from the President of Elegant Solutions Inc. dba Motorcycle Vent Screens: The Harley-Davidson® Road Glide® became my favorite touring motorcycle the first time I rode one! The “Shark Nose” frame mounted fairing offers both high speed stability cutting through the air at touring speeds as well as low speed maneuverability with the handlebars “free” of the weight of the fairing. My BSR (back seat rider) wife is extraordinarily comfortable riding with me and considers this bike to be a “limo on 2 wheels”!